Anchor Rangaraj Pandey had recently aired a video which claimed to debunk Periyar and expose how his views on women are problematic. A quick intervention in this regard.
This video offers nothing new. I guess Sumanth Raman and Rangaraj hadn’t read Periyar much. Why women were enslaved was an important intervention in Indian thinking. He begins with article of Suguna Diwakar ( https://www.vikatan.com/government-and-politics/politics/60186-contribution-of-periyar-towards-womens-rights) and goes on to quote by selective picking. How inviting women who re living alone, widows, sex workers for self respect movement is against women? It is an act that moves beyond patronising reformist politics.
On question of polygamy, Periyar says that he is ready to accept the same if polyandry is accepted by men. He with a witty scalpel peels out male privilege and exposes hypocrisy of patriarchy with his humor. And in the process questions brahminical gods too.

Rangaraj quotes titles from newspapers edited by Periyar. Even while quoting from the above mentioned piece he does nitpicking. See the images to get an idea. Omits titles like ‘Freedom of Women is essential for achieving Social equality’. 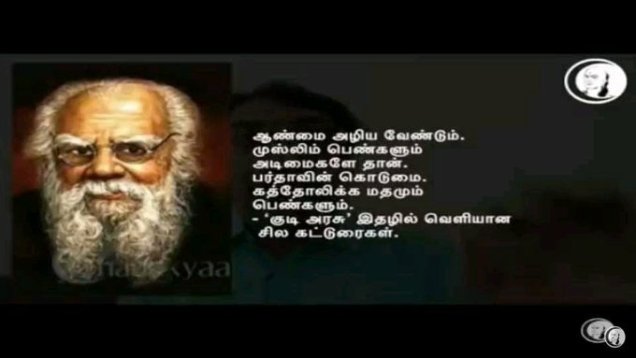 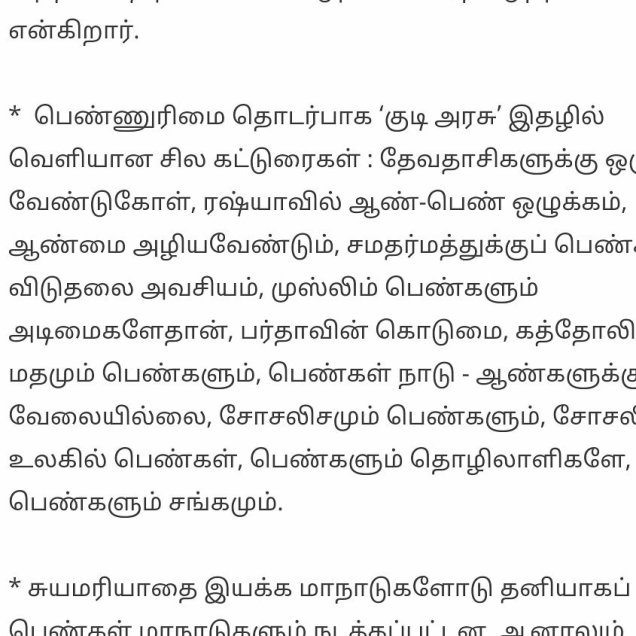 Rangaraj goes on to accuse that Periyar says ‘In nation of men there is no space for women’. Professor Sunil khilnani his essay ‘Sniper of the sacred cows’ takes this question how Republic of Indian women with Periyar’s ideas would have looked like. (The translation in tamil is here: https://saravananagathan.wordpress.com/2016/12/24/புனிதங்களைப்-பொசுக்கியவ/amp/)

Rangaraj in his interviews with Dravidian leaders used to parrot that Dravidian movement hadn’t criticised other faiths and does minority appeasement. This quote contradicts that accusation. And check how Periyar condemned ills across various religions: https://m.facebook.com/permalink.php?story_fbid=155551214621482&id=137250963118174

Pandey again cleverly nitpicks and selectively quotes from ‘பெண் ஏன் அடிமையானாள்’. It is a remarkable work which came much before Second Sex. For English translation of the work by meena. kandasamy. Check: Why women were enslaved.
Pandey takes offense with Periyar calling for annihilation of masculinity. It is nothing but the source of women’s slavery. So, he waged all out attack on the same. Check the image:

Then comes the quote about cinema actresses. This is the piece quoted: . In this he urges women to look beyond portrayals of women as makeup dolls and strive for fame, bravery, social service. He also wants non brahmin women to participate in politics.

http://www.keetru.com/index.php/2016-10-05-08-08-14/nimirvom-dec19/39489-2020-01-10-08-37-59
The following two images would elucidate how Periyar envisioned an equal marriage in which both genders had the liberty to part ways, make choices, defy sacredness associated with unhappy marriages. He clearly states satisfaction & joy in marriage is essential.

These quotes from the show by Rangaraj clearly shows what an eternal humanist Periyar is! Rangaraj is not clearly happy with the fact that Periyar bats for comforts, rights of women on par with women so that they attain satisfaction, pleasure and fulfilment of their desires :

There is much more to read and explore. Here vintage Periyar links patriarchy, masculinity and child birth. In an act of iconoclasm, he asks women to shed their uterus. He further criticised men for seeing women as child bearing machines. He had vocally urged men to undergo birth control. Further, this is not to be seen just in Western scientific notions of birth control. ‘There is a basic difference between our insistence on birth-control & other’s notion of birth-control.They have only thought of family & national welfare through birth-control. But we are only concerned about women’s health & women’s independence’ – Kudi Arasu 14-12-1930.
By defining Birth control beyond national welfare and scientific temper Periyar as prof Anupama Rao argues sees women as equals & transcends patronising, narrow limits of nationalist upper caste reformers. Periyar was well ahead of his times. And by misquoting, selectively quoting and trying to fit him in Pantheon of leaders who played to the podium Rangaraj errs. Periyar was sniper of the sacred cows. His attacks on brahminical patriarchy is of utmost importance even today. 16/16

This work is licensed under a Creative Commons Attribution-NonCommercial 4.0 International License.